This article is about ‘Pictorial Depth’ in a photo, it not really about DOF (Depth of field), although DOF can be important for communicating ‘Depth’. Pictorial depth is a third dimension in a 2 dimensional image.

Learning how to recognise ‘Depth Cues’ will help you to use them in your photography.

Depth perception in a photo is created with a number of ‘Pictorial cues’.

This photo was taken in Iceland in 2009. I hiked to the top of Skogafoss Waterfall and found this scene just a few meters along the hiking path. I will use this image to discuss how the different depth cues can work in a photo.

If one objects overlaps another, we assume that the overlapped object is further away. In my waterfall photo, there are many examples of nearer objects overlapping further objects. This is a very powerful depth cue because it can’t be wrong! The fragments of rock on the moss overlaps part of the river – there is no question that this object is closer.

There are other points of overlap. Can you spot them and explain how they communicate depth?

Height in the scene

Until you get to the height of the horizon, objects which are higher in the scene are assumed to be further away. The usually are. That moss and rocks are low in the photo. There are 2 levels of waterfall in the picture. They probably are higher than the river and moss stones, but it is easy to see how the upper waterfall is further away because of the more powerful ‘Occlusion’. Above the horizon, the opposite becomes true and objects lower in the scene appear further away. This can be seen with the clouds. The clouds at the top of the image are seen as being closer.

Textures and colours change as they get further away from us. Can you see 2 examples where the colour has changed in the distance?

The orange landscape above the waterfall changes in a number of ways. Similar gradients of land get darker a they get further away, but there is also sunlight on the land which communicates more information about the shapes of the clouds.

The near textures on the moss and stones have much better clarity and contrast than those rocks across the river.

The Texture gradient is best viewed as sharpness in the photo.  The sharpness gradually falls off into the distance beyond the point of the rocks in front of the waterfall.  Beyond the waterfall there is very little detail and texture and of course, it’s not very sharp.  Sharpness is not a priority on the distant hills where the texture is so insignificant.

Contrast this to the immediate foreground where the stone and moss are nicely sharp.  The high texture in the foreground does require sharpness.  If I hung this on the wall as a large print, the first part of the image that people will connect with is the high texture foreground.

This is how DF can assist in the illusion of Depth in a 2D photo.  I think this is important in Landscape Photography Focusing. It means that if your foreground is a high texture foreground and the background is low texture (like the horizon over the ocean), you would adjust your focus to favour the foreground.

Conversely, if you have a high texture mountain in the background and the foreground is a reflection pond, then you would adjust your focal point to favour the background.

Choosing the right lens is critical for good sharpness in landscape photography. The distortion in wider lenses contributes to depth communication. The wider angles are best for including a foreground which automatically gives a strong sense of depth in a photo.

Here are my prime lenses that are responsible for the photos on IcelandAurora.

This vertical photo shows a small lake house on the banks of Þingvallavatn Lake in West Iceland.

My main goal for this photo was making the most of the reflected house. By using a vertical frame, I introduced a foreground and allowed the edge of the lake to form a line that communicates distance very well.

Iceland is very windy, so reflections like this can be rare and hard to find. Is the communication of depth better because of the reflection? Does this photo tell you that this is the largest lake in Iceland? 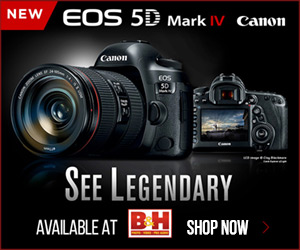